I’d been looking forward to seeing John Krasinski in his horror film debut ever since I saw a trailer for it. What I didn’t expect was to see it in theaters, mainly because I figured I wouldn’t have the time.

But alas, my girlfriend, me, and some other friends ended up in the theater on a Friday night, not really sure what to expect. I mean, let’s be honest. The only reason I went to see the movie was Jim from the Office. If the movie was good, then that was a bonus.

The premise was interesting, at least, while maybe not the most flashy of ideas. Almost as soon as the movie began, however, I could tell this was very well done, and every second-long frame was meticulously crafted. There are few movies where it feels like every scene, every image, is purposefully set up and shown, but this was one of those few. Anyways, on to the grading! 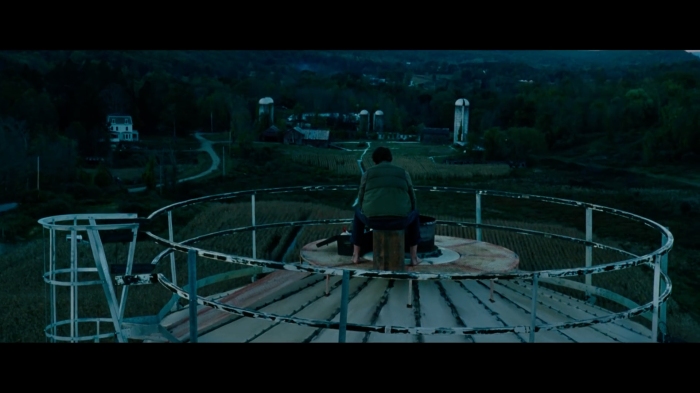 So, needless to say, these two are both very well-known and successful when it comes to acting. Emily Blunt has made a name for herself, starring in various big-name movies, and recently showed up in the psychological thriller Girl on the Train (but read the book, not the movie).  And John… is Jim. And I won’t stop calling him Jim, so deal with it. Also, they never gave him a name in the movie, that I can recall, so I choose to believe that his name was Jim.

Anyways, they both showed off just how good they are in this film, both when acting with other people and when by themselves. Seeing as they’re the only two adult main-characters, they had a lot of pressure on their shoulders. I mean, having kid actors that are talented was awesome, but if these two didn’t meet the bar we set for them, the movie was going to be thought of as a let-down, whereas any acting flaws by the younger ones could have been overshadowed by Emily Blunt and Jim.

Not only could Emily Blunt and Jim act (and direct, in his case), but the two other main actors were fantastic as well, despite being younger and less experienced. I didn’t recognize either of them from previous films, but that didn’t stop them from being just as good as the adults.

Through this great acting and marvelous writing, A Quiet Place is full of characters you root for. Most of the time, in horror movies, I actually want the good guys to die, just because I’m sick of every movie having a happy ending. This one, though, I really, really wanted Jim and Co. to somehow make it out alive. Since it seems like the rest of the world has already been overtaken by the monsters, I wasn’t sure where exactly they could go, but still I held out hope. Much like the characters in the movie.

The simple fact is: this movie was better in theaters than it could possibly have been at home. With their surround sound, blaring volume, and the large screen, it just felt like you were in that world. There were times in the movie where everything was so quiet, it was awkward to even take a drink, because it felt like everybody could hear everything you were doing. After two hours of sitting in the dark theater room, walking out to the main lobby where everybody could talk freely and make any noise they wanted was a shock. It felt… unnatural. And for the next few days, I wondered how much needless noise there is in our world.

I really enjoyed the music score for this film, and how it was placed thoughtfully to add tension, but not so much that it ruined the frightful atmosphere of quiet. There was just enough noise, and just enough silence, that it really made for a scary experience.

The main thing I long for in a movie like this, where the entire earth is in a post-apocalyptic state, would be more information about the rest of the planet. Are there survivors holed up in a city somewhere, or multiple cities? When did these creatures first come about? If they really do attack noise, how did everybody not die within the first few days, before people figured out what the cause was?

We see hints of newspapers from all across the globe, detailing what they know about the creatures, with headlines such as “It’s Sound!” and “Stay Safe. Get Underground!” but never any real information. Are there people actually underground? Why didn’t Jim and his family follow them? There is a scene (see picture above) where it’s shown that there are other families in this countryside, maybe a dozen or so. Wouldn’t it be better for them to band together and try to do something?

This is one of the reasons why I liked Planet of the Apes so much. I didn’t expect this movie to show everything that happened, but I would have liked some more details. After all, their entire world changed in the span of 89 days. I wanted to see that progression a little more.

The ending is one that most people will like. It has that “female cocking a gun with a determined expression” moment (literally) where you think, “Dang, she’s gonna go kill all these stupid monsters.” It has the deaf girl making use of technology and figuring out that high-frequency waves can render these creatures crippled. So, yeah, it’s cool. But it’s disappointing. What I wanted was to either see them take out the creatures, and find a new, better life, or see them all die and understand that there was no way out of this situation.

Instead, we got the ambiguous ending (which I am a fan of, just not in this case.) For most of you, it might put a nice bow on the movie, but for me, it was like leaving out the last three chapters of a great book.

This movie had only a few bad things about it, and the World Building was really just me being picky. The ending, though… That keeps it from getting a better score. I loved the film, the concept, and appreciate the fact that *red alert* something interesting and unique was made in Hollywood, but then again, that’s what the horror genre is best at… Staying unique, while the rest of the world makes the 28th Avengers movie.

**Correction: If you read my review of A Quiet Place 2, you’ll see that many of my issues with this movie were resolved in that sequel. So I’ve bumped up the score from 9 to a 9.5, because with that in mind, it deserves it.