This one’s for you, Madison/Hanover!

—Comment below and tell me your own spooky tales—

Let’s kick things right into gear. Today, we’re looking at…. the most haunted places in Madison and Hanover, Indiana. For those of you who don’t already know, that’s where I grew up/currently live. If you want me to go all history-nut on it, sorry. That’s what I have Wikipedia for. And yes, I will cite Wikipedia with no shame. Sorry, English teachers. 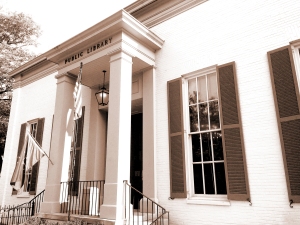 Places like the Jefferson County Public Library aren’t normally thought of as sinister, except in Stephen King’s It. The one in Madison, however, has its own stories, and might be a bit creepier than you’d expect.

For one thing, if you were to take a ride on the old, rickety elevator that travels between the three floors, you might find that you aren’t alone. Especially, it seems, if you’re a young woman. This ghostly gentleman has a habit of brushing them on the shoulders, and patting their backs silently. If you ever enter the elevator, and find a young man sitting in a wheelchair, well… don’t say I didn’t tell you so.

He may not be so violent as other ghosts, but he has a well-known backstory nonetheless. Charlie, as he’s called, was the former resident of the large building, when it was originally a home owned by his family. The elevator was actually installed for him in the first place, and kept when the building was turned into a library.

While that is the most famous story, you can imagine there are other ghosts wandering between those shelves full of books. But there’s one good thing we can say about the ghosts: Even they know you have to be quiet in the library.

Movies aren’t the only things to see at the Ohio Theater.

If floating lights are your cup of tea, this is the place to stop by. Buy a ticket to a movie or a play, and you might end up with two shows for the price of one. In the balcony-area, it’s said that bulbs of light are seen bobbing about. My first thought was, “Maybe it’s just people’s cell phones.” We’ve all heard the “Those little lights can be seen everywhere” speech. But it seems that isn’t possible in most cases.

For one, this often happens when people aren’t sitting in those seats. So the floating lights, whatever they are, aren’t people. They aren’t cell phones.

Oh, and one other, slightly-more-creepy story. If you find yourself in the theater at midnight, then you’ll hear a very real, piercing scream. Not from a movie. Not from a person. From… something else. 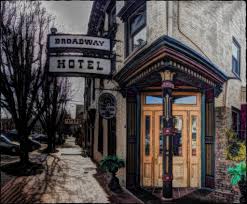 One of the more historic places in Madison (it’s in the name, after all) is the Broadway Historic Hotel and Tavern. This one has one of the most real-life connections. The main ghost is said to be that of a criminal, who was shot and died on the premises of the hotel. He’s seen most frequently in the tavern part of the establishment, although I haven’t found a source that clarifies where, exactly, he was killed.

If seeing a bloody, bumbling ghost doesn’t do it for you, the next segment of our scary stories is pretty freaky as well. If you ever stay the night in the hotel, sleeping in one of the rooms, you can expect to find yourself awakened by the cries for help from a ghostly woman who wanders the halls. While a plethora of people have all confessed to hearing her, the one who admits to seeing her is very rare. It seems that nobody has ever laid eyes upon the spirit.

These are just three of the many stories from Madison, Indiana. I’ll have more in the next post, as well as some frightening tales from Hanover, my actual hometown. Until then, keep the lights on.

Part 2. With an emphasis on Hanover, Indiana.

4 thoughts on “Most Haunted Places in Madison, Indiana PART 1”